AVETI : Climate Adaptation and the Economic Development of the Cocoa and Yam Sectors 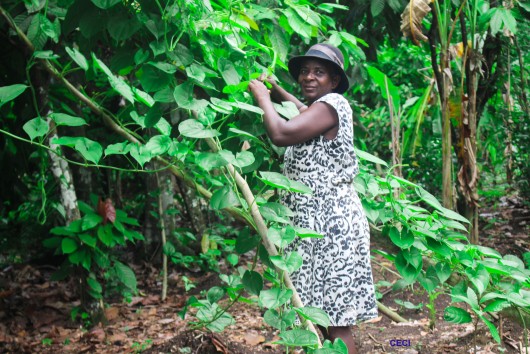 In Haiti, over 4 million people are living in situations of food insecurity. That is the equivalent of half of Quebec’s population!

Factors such as extreme weather events, climate change and socio-political unrest affect the agricultural production of the country and increase the vulnerability of the population.

AVETI, an environmental and economic development project, implemented in Grand’Anse in the south of the country, focuses on the cocoa and yam sectors to increase economic well-being. The project particularly targets women and youth in rural communities as they are more affected by food insecurity.

Several activities have been identified for the success of the project: climate change adaptation of agricultural techniques, the rehabilitation of damaged plots of land, the adoption of innovative agricultural practices that increase the quality and quantity of products and finally the regrouping and dialogue between value chain actors notably to develop new markets.

In situations of food insecurity, women and young people suffer more as they don’t have access to resources and do not have the chance to participate in decision making.

CECI and it’s partners work in close collaboration with farmer’s groups to raise awareness on the impact of inequality and promote the presence of women and young people in the governing structures on all levels of the value chain.

Your donation will support economic development in the Grand’Anse region in Haiti, the fight against climate change and will allow women and young people to take their rightful place in their communities.

More information about the project.