Women's entrepreneurship and rice growing, a winning equation in Benin! 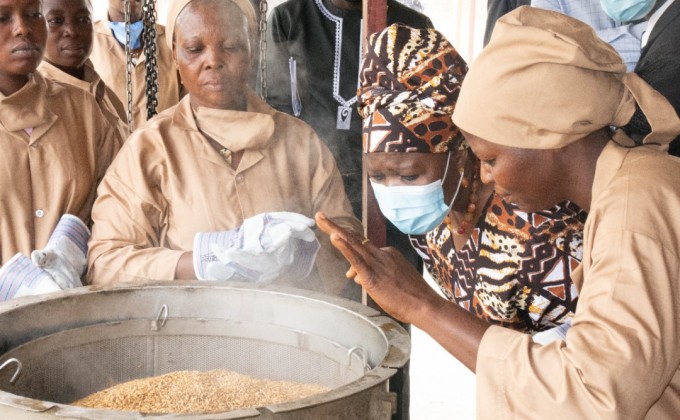 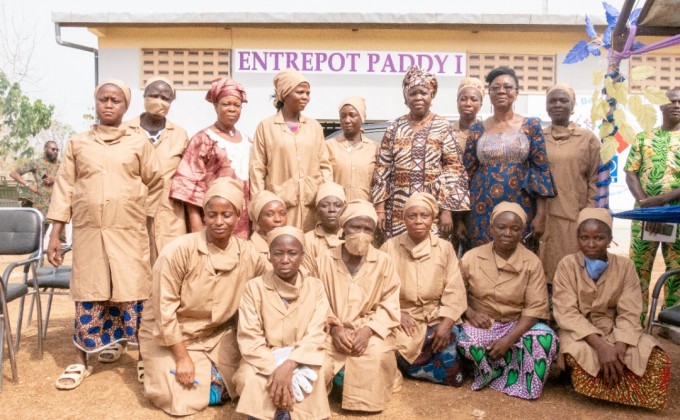 The Support Projects for Women's Entrepreneurship in the Benin Rice Sector (PAEFFR) implemented in 2017 has kept its promise to increase women's economic power by transforming their artisanal methods of production and management through more efficient techniques and higher quality standards. Covering six municipalities in the Collines department (Banté, Dassa, Glazoué, Ouèssè, Savalou and Savè), the project made it possible to strengthen the economic vocation of the Regional Union of Women Parboilers of the Hills (URFER-C) and its six municipal cooperatives.

Recently, the exceptional performance of PAEFFR caught the attention of national authorities for the promotion of parboiled rice in Benin. Last April, during her field visit, the Vice-President Mariam Chabi Talata declared herself in favor of decisions favoring the consumption of Beninese rice, in line with the vision of the Head of State Patrice Talon, in through the Agriculture component of the Government's Action Program 2021-2026.

"The State recognizes the greatness of the task implemented by the Regional Union of Women Rice Steamers from the Hills (URFER-C) in terms of qualitative contribution to nutrition for the well-being of the Beninese population, while whole" Mariam Chabi Talata.

URFER-C, created in October 2014 after an exchange visit on the parboiling experiences of the National Union of Rice Parboilers (UNERIZ) of Burkina Faso, now has 1,076 women, including 342 young girls/women who have found their rightful place in the rice sector.

Modernization, investment in machinery and optimization of preexisting material are some of the keys to success. The women now have new equipment: optical sorter, destoner-winnower for paddy rice, solar panels, water tanks and a bagging machine, all equipment that has revolutionized production. The final processing center has been improved thanks to the construction of a store, a mini rice mill and a drying area in the shade. In addition, four irrigation sites in Bantè, Dassa, Glazoué and Ouèssè allow women to better protect themselves from the variability of rainfall and improve yields and production of paddy rice in quantity and quality.

The results speak for themselves. Production has increased at least twenty-fold in the space of five years. The production of paddy rice increased from 30 tons in 2017 to 645 tons in 2021 while the production of parboiled rice increased from 18 tons in 2017 to 405 tons in 2021. Thanks to the filing of the Rice SAVEUR label with two flagship products (parboiled long grain and parboiled broken), the union quickly found its market. Its clientele is based on Nigerian wholesalers on the wholesale market (Glazoué) and consumers in large cities (Cotonou, Porto-Novo, Abomey-Calavi, Parakou) or agricultural high schools, supermarkets, health centers. According to the Mayor of the Commune of Glazoué, Gilles Houndolo:

" Parboiled rice from the hills is a very high quality food, two to three times richer in vitamin B1, B2. More than a rice, I would say that it is a food " Gilles Houndolo

In addition to this national recognition, the objectives of improving financial management and financial services have been achieved. Traditional financial management that is not very functional and lacks institutional memory has been transformed thanks to a computerized management system and improved administrative, accounting and financial management procedures. In addition, in 2021, 532 women rice parboilers completed training in reading, writing and arithmetic and for better management of their parboiling activity. For example, 35% express themselves better in French, which improves their access to information in the rice sector and within cooperatives. A steamer testifies:

" When I think of everything I lost for so long because I was illiterate, it hurts me. I want to cry... Literacy has completely transformed, changed my life " Steamer of the project

Better equipped, women parboilers can now easily produce administrative documents and plan their work. The effects of this literacy are positive in the lives of women rice parboilers in terms of empowerment. In addition, sessions on positive masculinities have contributed to greater participation of women producers and parboilers in community life and improved consultation in terms of decision-making within households. They are better represented in consultation frameworks and participate in political dialogue to defend their interests.

Today, URFER-C is an organization with autonomous governance, offering reference and competitive parboiled rice on the market, ensuring the improvement of the living conditions of women members.

Although this program will end in November 2023, we hope that the profitability of parboiled rice production and the increasingly crucial challenges of food self-sufficiency in Africa will motivate the authorities to continue organizing the marketing of local rice, in particular by supporting the steamers of URFER-C.

To learn more about the project

For more information on the visit

To watch the interview