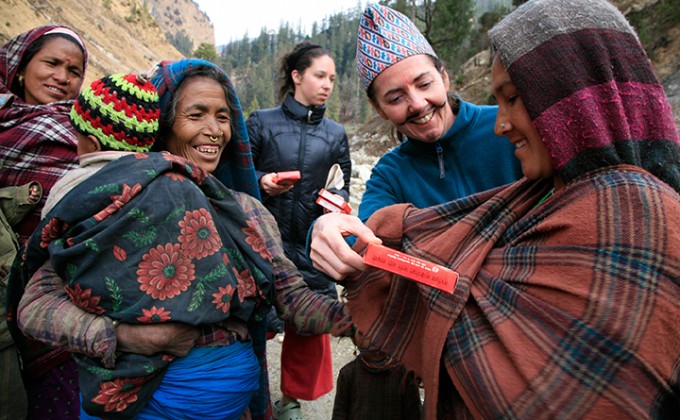 The Program for Accountability in Nepal (PRAN) is a program of the World Bank implemented in agreement with the Government of Nepal. Financed by the State and Peace-building Fund (SPBF), a Trust Fund financed from the World Bank’s administrative budget including the governments of The Netherlands and Norway. PRAN aimed at strengthening the capacity of civil society organizations and other non-state organizations, and that of the government officials, for constructive engagement for good governance through the effective use of social accountability (SAc) approaches and tools in three themes: a) Public Financial Management; b) Municipal Governance; and, c) Public Service Delivery.

Center for International Studies and Cooperation (CECI), a partner of PRAN implementation, was selected competitively for managing grants to Civil Society Organizations (CSOs). Under the PRAN, CECI made grants to Nepali CSOs for action learning projects through two grant categories: a) large grants for piloting social accountability initiatives and, b) small grants for undertaking action research on development and testing of social accountability tools. Action learning grants were made to 30 CSOs in 2 batches of which 29 CSOs completed their project activities in October 2012 while one was dropped from the program early on. The sub-grantee CSOs implemented 14 different SAc tools during project period. Some practiced a solo SAc tool while others practiced from 2 to 4 tools with varying waits. The sub-grantees were selected on a competitive basis from among the eligible CSOs who applied for grants. The sub-grantee CSOs worked in 33 districts which include 7 mountain districts, 15 hill districts and 11 Terai districts in all five development regions of Nepal. Altogether 29 sub-grantee CSOs (coming from 25 districts) implemented sub-grant projects in 2 batches which comprised of 10 large grants and 19 small grants. The Action Learning projects reached more than 60,000 citizens directly of which, 39% were female and 61% male. On an average 20% of total direct beneficiaries were from Dalit communities and more than 30% were from Janajati communities.

Nepali CSOs have been carrying out some SAc initiatives since long. Some of these SAc tools include public hearing and public audit which are also a part of government activity as required by Local Self Governance Act-1999, Good Governance (Management and Operation) Act-2008 and Local Bodies Resource Mobilization and Management Procedure-2012. In addition to what government rules and laws have provisions on SAc tools, the World Bank funded PRAN substantially intensified the practice of SAc tools and lent momentum to social accountability campaign in Nepal. This resulted in formation of a critical mass of SAc practitioners at the local level and initiated process of constructive engagement between service providers and citizens for demanding better service delivery and public goods. CECI’s effective management of PRAN Action Learning Grants contributed to giving further momentum for piloting of various SAc tools. Given the complex social structure, geographical diversity and varying levels of literacy in project districts, the results achieved by PRAN sub-grantee CSOs have been substantial in terms of reaching greater number of citizen beneficiaries and in creating a common platform for service users and providers to work together for better service delivery.

Sub-grantee CSOs became primary agents to catalyze changes by practicing SAc tools and mechanisms. They proved their mettle in being movers and shakers of civic campaigns and advocacy on social accountability. These CSOs were able to reach wider sections of the vulnerable and marginalized groups through information campaigns, mobilization of existing community networks and formation of local groups. This has enhanced active grassroots participation in decision making process and in monitoring of public service delivery and local budget expenditures. Also, by using different SAc tools such as public hearings and PGRM, CSOs have succeeded in channelizing citizens’ voices to hold public service providers transparent and accountable.

The outcomes and results achieved by CSOs under Grant Making for Action Learning can be counted as encouraging. The results that have emerged from the practice of different SAc tools by the 29 CSOs and their respective SAc practitioners out of the proceeds of PRAN grants facility can be summarized to be of the nature of promotional, attitudinal, empowering and holding the service providers to account. The practice has resulted in creation of a critical mass of capacitated CSOs, sensitized and functional community groups/organizations, empowered citizenry and enhanced client power and atmosphere for constructive engagement. This was possible due to strategic application of SAc tools by the sub-grantee CSOs.

But the sustainability of these initiatives is still in question. Therefore, policy advocacy for institutionalizing these tools must be carried out simultaneously alongside application of SAc tools by the CSOs. This can help ultimately promote sustained application of SAc tools and promote transparency and accountability in public services, municipal governance, public financial management and other spheres of public service delivery. Implementation of PRAN has set a step further in social accountability campaign in Nepal which also needs to be carried out further by local CSOs, development partners and stakeholders collectively in years to come.