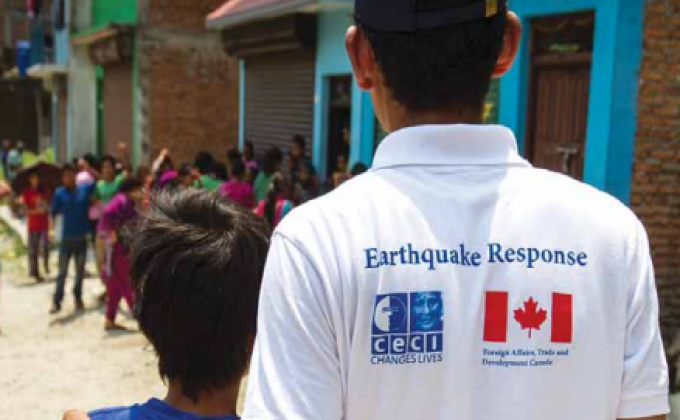 Two new projects were initiated this year: Public Expenditure Tracking Survey (PETs) and Earthquake Response Program. PETs is jointly managed by CECI and Policy Research and Development (PRAD) under the Sajhedari Bikaas Project funded by USAID. Th e study covers 58 VDCs of six districts (Banke, Bardiya, Dang, Surkhet,Kailali and Kanchanpur) of Nepal with the ambition to track the expenditure of block grants at the DDC and VDC level. Th e duration of the study is 10 months i.e. from July 2015 to March 2016.

CECI in the consortium led by World University Service of Canada (WUSC) and involving the Colleges and Institutes of Canada and Industrial Enterprise Development Institute (IEDI) is managing the Asian Development Bank (ADB) and the Nepal government funded Skills Development Project (SDP) and providing technical assistance to the Council for Technical Education and Vocational Training (CTEVT) and the Ministry of Education (MoE). Th e fi ve year project will have impact of increased employability of the Nepalese workforce. Its outcome will be the establishment of a marketresponsive and social and gender-inclusive TVET system.

The second phase of Uniterra Volunteer Cooperation Program (U2) funded by DFATD was successfully completed in March 2015. Th e third phase began on April 2015 for fi ve years. U2 contributed to strengthening 22 partners’ capacities in improving the economic and social wellbeing of the populations they serve whilst fostering sustainable development towards reducing poverty. Uniterra 3 (U3) has a focus on increasing the production and marketing of high value agriculture Message from the Country Representative CECI Annual Report | 2 and NTFP products through a comprehensive market system development approach.

Similarly, the Program for Accountability in Nepal (PRAN) was completed in September, 2014, and its second phase MDTF/PRAN2 initiated in July 2015. PRAN is a World Bank program which has aimed at improving demand for good governance in Nepal through the promotion of accountable, honest, transparent and responsive delivery of government services.

CECI has a strong focus on gender and social inclusion and works closely with partners in developing approaches and strategies for improving the participation and representation of women and disadvantaged communities in development initiatives. CECI’s projects are fi nancially supported by DFATD, World Bank, DFAT, DFID, SDC and FINNIDA. Th e details for each project and program for this fi scal year can be found in their respective sections below.

I would like to take this opportunity to express sincere gratitude to our donors for their support. Sincere thanks go to our implementing partners both GoN and NGOs in successfully accomplishing these activities. Finally, I would like to appreciate the leadership role of Communications Officer Ms. Mallika Bhattarai in preparing this report. Thanks are also due to all staff and volunteers for their assistance.