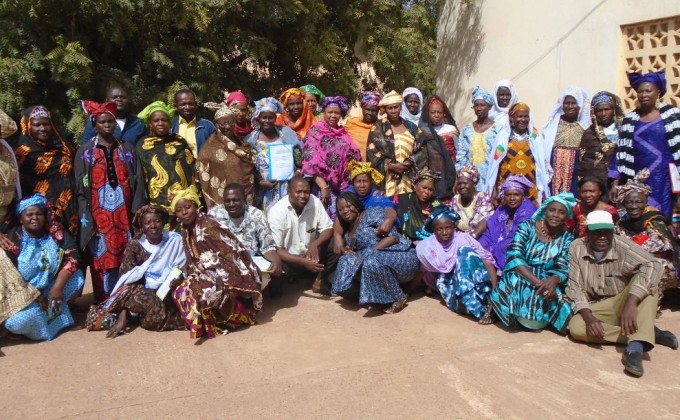 A Scourge to Eradicate

Gender-based violences are among the most widespread human rights violations in the world. In conflict-prone regions in particular, women and girls are often left on their own and are particularly vulnerable to this type of violences.

Mali, suffering from a security crisis since 2012, is no exception to this unfortunate reality. The government estimates that 85% of Malian women have been victims of gender-based violences. Theses violences can take various forms (beatings, genital mutilation, forced marriages, early pregnancies, humiliation, or deprivation of the right to own land) and have disastrous consequences on the lives of the victims, when they aren’t outright deadly.

Over the past five years, the project of Justice, Prevention and Reconciliation for Women, Minors and Others Affected by the Crisis in Mali (JUPREC) aimed to increase access to justice for the people affected by the crisis, including women and minors, and to ensure optimal respect for their rights. Beyond the consequences of the crisis, the project tackled the root causes of gender-based violences, mobilizing multiple protagonists in an innovative way.

Engagement of Men and Boys

In the majority of societies around the world, men are the main perpetrators of violence against women. However, not all men engage in these kinds of acts, and some may even become allies to promote women’s rights and encourage positive change.

In 18 municipalities across 6 regions of Mali, the JUPREC project and its partners have strengthened the knowledge on women’s rights for these allies, while helping them become aware of their capacity to mobilize other men to bring about positive change. These “model men” were supported as they prepared participatory activities to raise awareness in their communities, such as sketches, plays and talks in local languages, opening the debate on the distribution of household tasks at home or on the role of men in the education of children. They then organized “caravans of model men”, in which such men designated by their home communities went from one community to the other showing that it is possible to transform the unequal relations between men and women and that this is a win for the couple and the family.

Over the years, more and more men have joined them after witnessing the positive impact that the advice of “model men” had on their couple and family.

“I was not a model man; when I got married, I thought of the woman as an ornament in the home. JUPREC and the Association pour le développement des droits de la femme (APDF) showed me that communication and mutual understanding within the couple contributes to the development and well-being of all members of the household. At the start of the APDF awareness-building activities, I was aggressive. The training and information received allowed me to understand and practise what I learnt with my family.” – Radio host who now broadcasts radionovelas to raise awareness about human rights and the harmful effects of gender-based violences in the couple’s life.

Thanks to its approach on positive masculinities, the JUPREC project and its local partners have supported many men in the redefinition of their masculinity, towards non-violent behaviours and shared responsibilities within the household. This approach will also serve as a model in a new project in Mali by CECI.

In Malian communities, imams play the role of family mediators, promoting peace within families and beyond. Their voice is widely heard by the populations and they have a great power of influence on the behaviour of those who share their beliefs and listen to them.

Without going against its strictly secular values, the JUPREC project worked with imams to help them become agents of change by preaching for equality, providing egalitarian advice and accompanying men or couples looking to improve their family life.

“A woman must be treated as God has endowed her, with rights, such as the one to be treated as an individual and the right to ownership and to do as she pleases with her own goods and income, even after marriage. She has the right to be educated and to work outside the home if she so wishes.” – Imam of the Timbuktu region

In the regions of Gao, Timbuktu, Ségou and Mopti, the JUPREC project and its partners have set up and strengthened 28 peace committees that use social dialogue to prevent and manage local conflicts, whether they are open or latent. The objective of this initiative was to encourage citizen control over public action, mutual admissibility between civil society and the state, and the participation of communities in decisions that affect them.

In addition to fostering a culture of conflict resolution through dialogue, the peace committees have played a central role in supporting victims as they were directed to the regional offices of the Truth, Justice and Reconciliation Committee, the body responsible for documenting cases of violence brought about by the conflict in order to foster an inclusive transitional justice. The role of women in these committees has been carefully considered. 30% of the seats were reserved for women and their leadership was strengthened to ensure that their voices were heard. The peace committees have therefore made possible the creation of a process of inclusive and sustainable social change, helping to mitigate the marginalization of the most excluded populations, notably by helping the women victims of the conflict become agents of change.

On the other hand, a membership fee for peace committees will continue to allow them to support their activities after the end of the project.

Advocating for a Law Against Gender-Based Violences

The JUPREC project supported its local partners in redacting a draft bill against gender-based violences. Since 2017, however, the preliminary draft is being blocked by a few traditionalists actors and it is still awaiting adoption by the Malian parliament.

Advocacy actions have therefore been launched in order to put pressure on members of parliament and ministers. A petition calling for the adoption of a law has been launched and is already 5,000 signatures strong. In addition, social mobilization activities in favour of this law are ongoing, through the project’s local partners, inter-ministerial consultations and meetings with political decision makers.

These advocacy actions for the adoption of a law against gender-based violences will continue through CECI’s strategic support for women’s organizations in Mali.

To support the sustainability of its different approaches, the JUPREC project has set up regional networks of "model men", committed imams and peace committees that will facilitate exchanges, solidarity and the sharing of winning strategies to prevent gender-based violence. The recognition of “model men” and committed imams as key agents of gender equality will contribute to the sustainability of these means of action which aim to strengthen the integrity and leadership of women in the midst of the protracted crisis in Mali.